In my previous post I reviewed the RideMax plan I had made for my daughter and I to get through several attractions at the Animal Kingdom this past Thursday, December 9th. This is a report on our vist. 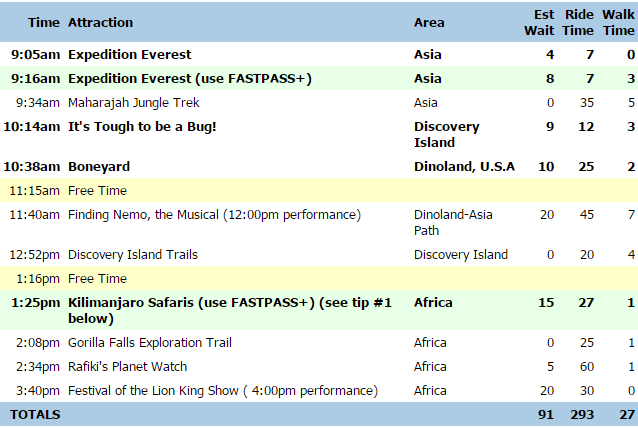 If you want to know more about the plan details, be sure to see the previous post here on the RideMax blog, where I outlined some of the decisions that went into this one. For those who don’t want to take the time to do that, I’ve copied the plan above.

As you can see, we were set to start the day with two rides on Expedition Everest. The plan was to ride in the standby line first, then use our FastPass+ reservation for the second ride.

We arrived inside the park fifteen minutes before opening time. The picture above shows the “crowd” lined up heading in the direction of Expedition Everest. Not too bad, really.

We positioned ourselves on the far left side of the rope, since there was a gap in the crowds there. We’d wait here until 9:00am, when Disney dropped the rope and let us into the attraction areas of the park.

Click on the video link above to watch a Hyperlapse video I took as we made our way over to Expedition Everest (be sure to wave to Santa Mickey and Minnie as we go). The video doesn’t have any sound, and it may be hard to tell from just watching the video, but the ride was actually closed for a “delayed opening” when we finally arrived at the attraction entrance.

Ready — and waiting — to ride, on an overcast and cool morning.

We had something of a decision to make here right off the bat. Do we just hang around and wait (and hope) for the ride to open, or do we move on and come back later?

Given that our RideMax plan had us visiting the Maharajah Jungle Trek when we finished with our two rides here, and that the plan allowed a full 35 minutes for Maharajah, we opted to stick it out and wait for Everest to open, with the idea that we could cut our visit a bit short on the Trek if we needed to. The Cast Members did allow us to enter the attraction queue area in front of the ride, which I took as a hint that the delay might be shorter rather than longer.

There are some nice views up here. Looking to the right we can see the Avatar construction in progress.

Over to the left are the Swan and Dolphin hotels…

…as well as Spaceship Earth at Epcot.

We finished our second ride and were back out in front of the entrance by 9:43am, with the posted wait still just at 10 minutes. I wouldn’t expect to see a wait this short during Christmas week, of course. In fact, a RideMax plan created for Christmas week could look very different from one used on a low-crowd day like today.

I must be getting older though, as two rides back-to-back on Everest had me about ready to lose my breakfast. It would actually take several *hours* to recover. (Tough work, I know, but somebody has to do it.)

Next up is the Maharajah Jungle Trek. This is at 9:49am, which still gives us twenty minutes or so before we need to move on to the next attraction on our list according to the RideMax plan.

There were a lot of animals out and about today.

For some reason, this part of the Trek strikes me as having “photogenic potential,” but I guess I’m still working on capturing it.

We finished what we wanted to see on the Trek and made it to the next attraction on the list, It’s Tough To Be A Bug, by 10:12am. This was a couple of minutes early according to the plan. We didn’t feel too cheated, even though we had to cut down our time on the Trek to make up for the lost time at Everest earlier.

I’m still not sure who this attraction is targeted for. It’s way too scary for very young children, but sort of silly for adults.

The black widows are always a crowd-pleaser.

Don’t worry, I’ll smile at the end of the show and try to make all of the little kids stop crying before it’s time to leave.

Next up is the Boneyard in DinoLand USA.

I’ve lived in Orlando for 10+ years, and I’ll have to confess, this is the first time I’ve been inside this particular attraction.

It’s a great place for small children to blow off some steam, complete with that rubbery-foam flooring stuff, as well as tunnels and slides to explore.

This large dinosaur skeleton covers an overhead walkway at the entrance to DinoLand.

Here’s a view from the walkway itself.

On the other side of the walkway is a large sandpit “excavation” area, complete with shovels, pails, and dinosaur bones.

Stepping on these various footprints evokes dinosaur growls from loudspeakers hidden nearby.

At just after 11:00am, “Free Time” on the RideMax plan means it’s time for lunch. We opted for Pizzafari today. (Click on the image for a larger view if you care…  🙂 )

Another view of the menu as displayed outside the restaurant, sans prices.

My daughter opted for the Cheeseburger Flatbread. This consists of the flatbread and tomato sauce, topped with hamburger, cheese, lettuce, tomato, and pickles, along with a mustard-mayo drizzle on top.

I have to admit that I’m not really sure how to take this one. I’m sure it’s been the butt of numerous Twitter jokes by now, as it’s sort of an oxymoronic concept to begin with. You start with “flatbread,” which could be argued is a sort of healthy alternative to a thicker pizza crust, but then top it with a pile of stuff that could have come from a McDonald’s topping bar (if they had such a thing). It actually tasted OK though, and it was filling, so it at least achieved its purpose on those two fronts.

I must admit that especially if you’re visiting with young children, you may want to consider this one.

I opted for the Hearts of Romaine Salad with Chicken, which was just sort of “meh.” It was basically the ingredients of a chicken caesar salad, but on lettuce which I needed to slice myself before eating. The flavor was exactly what you’d expect from a chicken caesar salad. Not much to recommend this one, unless you’re going out of your way for some extra fiber for lunch.

The snails all over the ceiling of the restaurant were cute.

Next up on the plan was Finding Nemo, the Musical. Let’s look at a few pictures from the show, shall we?

Execution-wise, this show is well-done, and the cast did a great job with the performance. I do wonder if it’s had its run though. It will actually hit its ten-year anniversary in January. Maybe it’s time for Disney to consider something else?

Next up on the RideMax plan is taking in the scenery around the Tree of Life.

There are some pretty cool animal figures etched into the tree here.

It’s 1:07pm, and the walkways are finally starting to feel crowded. This was the scene as we made our way from the Tree of Life area back to Africa.

We had a few minutes to kill before the RideMax plan had us riding Kilimanjaro Safaris, so we opted to look into the Harambe Marketplace for a quick snack.

Although, it wasn’t all that “quick.”

Even though we had only ordered a pre-made dessert and a cup of Sprite, it seemed like I had to wait 10-15 minutes *after* I had ordered before my order was ready. I still hold out hope that they can figure out something more efficient here.

This replaces the Milk Tart, which was previously on the dessert menu here, and I must say, I MUCH prefer the Milk Tart to this concoction.

This cake was OK, but nothing to write home about, as it was just a basic spice cake with a vanilla glaze icing on top. One pleasant surprise was a hint of citrus zest in the cake, but it’s otherwise not very noteworthy.

I feel like replacing the Milk Tart with this cake may have been a simple cost-cutting move, as I’m guessing this is a lot easier to make (and thus less expensive) than the tart was.

Who could resist a peek into Zuri’s Sweets shop as we made our way over to Kilimanjaro Safaris?

We arrived here at 1:40pm, or fifteen minutes behind schedule due to the long wait for the Malva Spice Cake. I’m glad we had FP+ reservations.

Despite being the middle of the day, there were still a lot of animals out and about.

Our driver explained that the elephants like to use dirt as a sort of sunscreen. Here’s the spray-bottle version of said sunscreen in use.

Next up is Gorilla Falls Exploration Trail, recently renamed from the Pangani Forest Exploration Trail. Even though we’re eleven minutes late according to the plan, I’m confident we’ll be able to make up some time here.

The gorillas were fun to watch, and if you have kids, I especially recommend this attraction.

Having finished Gorilla Falls, I opted to call an audible at this point, and swap Planet Watch with Festival of the Lion King.

These guys are amazing…

…and so is this guy.

Like Nemo, this show is fairly old too (even older than Nemo), but somehow I don’t seem to mind it as much here. I consider this a must-see show if you’re planning a visit to the Animal Kingdom.

The street entertainment is great here in Africa. The way this guy posed for the camera made me wonder if I should have asked him some sort of “Humans of Walt Disney World” question though.

We finished the day with Rafiki’s Planet Watch, which includes a petting zoo area for young children.

Yes, there are goats here. Lots of goats.

I was a bit surprised to see that the Zootopia exhibit is still up inside the Conservation Station area.

He doesn’t look too thrilled to still be here either.

Chip and Dale were signing autographs outside the Conservation Station. It’s 4:09pm, and time to wrap up today’s round of RideMax Roulette.

I normally like to use RideMax Roulette as an opportunity to learn something new about the park and/or using a RideMax plan in the park. My two main takeaways today are:

I hope you’ve enjoyed today’s round of RideMax Roulette. As always, if you’re looking for a custom game plan to help you save time in line at Disneyland or Walt Disney World, be sure to check into RideMax!