I’m headed to Animal Kingdom tomorrow, April 10th, to test a half-day RideMax plan. You can follow along for live updates from the park:

I’m calling this “RideMax Roulette,” because rather than using a predetermined list of attractions, I decided to plug in a (mostly) random list of shows and attractions into RideMax, then created my half-day plan from there.

I say it was “mostly” random simply because I knew in advance that I wanted to visit both of the trails — Pangani and Maharajah Jungle Trek — and I also wanted to see the Lion King show. (Sorry, but I also knew I didn’t want to sit through the 40-minute-ish Finding Nemo show, and I didn’t want to get soaked on Kali with my DSLR in hand, so I omitted these from the list of possible attractions.)

After adding my three “must-do” attractions to the list, I used a random number generator to come up with five others, and I was left with the following list of eight attractions altogether:

I know this may seem like a pretty wimpy attempt, given that the plan doesn’t include the Safari, but hey, it is what it is. I think it’s also good for me to test RideMax plans that include non-obvious ride selections, as it has sometimes helped me to see and/or fix problems that might come up with various ride choices.

Given this list of attractions, I decided to use FP+ for at least Dinosaur and Expedition Everest. I would normally use the other FP+ for either the Safari or Kali River Rapids, but since neither of these are in my list, I’m using the third FP+ slot for It’s Tough to be a Bug! (Yeah!)

After crunching on this list of attractions, here is what RideMax came up with. Remember, RideMax’s goal is to minimize BOTH waiting AND walking time: 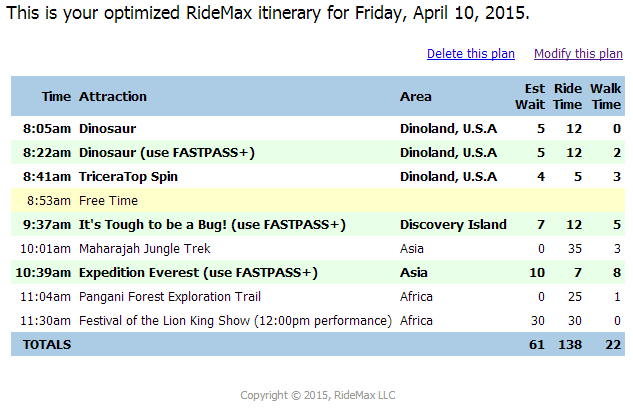 Notice the large-ish block of “free time starting just before 9:00am. I think I’m going to use this to go see DiVine near the park entrance.

After creating this plan, I went into Disney’s “My Disney Experience” application and reserved my FP+ time slots to correspond with the times shown in green on the plan. (And yes, I realize that I most likely won’t need those Dinosaur and ITTBAB FP+ tickets that early in the day. If this were a full-day plan, you’d likely see those FP+ slots set up for later in the day.)

As you can see in the image above, Disney is now using a new “follow the rope” procedure when they open the Magic Kingdom in the morning. This is used to help prevent guests from running to the very popular new Seven Dwarfs Mine Train ride, as well as to the Anna and Elsa meet and greet.

I visited the Magic Kingdom yesterday, and followed pretty closely behind the Cast Members leading the way, as the picture above — and the one right below — shows.

What may not be obvious from these pictures, is the HUGE crowds following behind. I somehow managed to hold my camera over my head, pointing backwards, and caught the following amazing sight (click on any image for a larger view):

With most of these folks attempting to get to these new attractions, you can see how important it is to both arrive early and to know what you’re doing once you get there. The first one is up to you, and if you’re a RideMax subscriber, we’ve added an in-plan tip (our longest one yet) to help with the second one.

I also hopped over to the Animal Kingdom yesterday to check out the new Festival of the Lion King theater, which has been built in Africa, replacing the old location in Camp Minnie-Mickey. As you can see in the picture above, the standby entrance is on the left, with FP+ access on the right.

Just to put the new location in context, this is the wide-angle view from the bridge leading into Africa. Kilimanjaro Safaris is straight ahead on the right-hand side of the picture, with the new Lion King theater on the very far left-hand side of the image.

Once you’ve crossed the bridge, just hang a left here to get to the new theater.

Here’s the view of the theater building taken from the far end, looking back toward where the previous picture was taken.

It’s the same great show as before, one I consider a “must see” attraction!

A final note is that in my observations yesterday, there is no need to use FP+ to visit the FOTLK. For the noon show, you could still get in standby by showing up just 15 minutes before showtime. Arriving a half-hour early should be a safe bet on all but the busiest days of the year.

For Disney World RideMax customers who may not have noticed, we’ve just updated our “FastPass Tips & Tricks” page. You can view our updated advice in the “Tips & Hints” section of RideMax itself.

One item contained in this update is that the FastPass machines for the Dinosaur attraction at Disney’s Animal Kingdom, shown above, are “disconnected” from the rest of the FastPass network. This allows you to obtain a FastPass for this ride even if you may have just obtained another one for a different attraction. The advice also lists other FastPass machines which are “off-network,” as well as a FastPass loophole for one of the parks that not too many seem to be aware of.

And of course, if you’re using RideMax to create your custom touring plans for Walt Disney World, the software is aware of these loopholes and can use them to your advantage when it creates your plans.

If you’re a Disney World RideMax subscriber, head on over to RideMax and check out the newly updated advice!

There seems to be a near-consensus in various Disney-related circles that if you’re visiting Kilimanjaro Safaris in Disney’s Animal Kingdom, you simply *must* do it early in the day. The logic goes that the animals are more active then, so you’re more likely to get a better experience if you do the Safaris early.

If this is *you* and you’re using RideMax, you can set aside time to visit the Safaris first thing by setting your “start time” to about 35 minutes after the park opens, and using this gap to visit the ride. (You could also use a “break” in RideMax for a similar purpose.)

On the other hand, what if you simply allow RideMax to do the plan optimization for you, even if the plan has you visiting Kilimanjaro Safaris later in the day? My opinion is that this isn’t as bad as people think, and this may especially be the case during cooler seasons of the year, such as January, when I’m writing this post.

To illustrate, I’ve posted below some pictures that I took on the Safaris yesterday, when I didn’t get on the attraction until close to noon. It had just finished raining about an hour or two earlier:

The crocodiles were out in large numbers!

There were a lot of giraffes out and about. Probably more than I’ve seen on any other visit…

The rhinos were out in force!

Another shot of the rhinos…

The cheetah was out in the open…

…as were both of the lions. Above is the female.

And here’s the male.

Best “posing” I’ve seen from the lions in a while!

And finally, if you wanted to see zebras, this was your day!

I hope these pictures help illustrate my point. You certainly can do the Safaris early, if that’s what you really want to do. But doing them later in the day — especially during the cooler parts of the year — is simply fine with me!

What has been YOUR experience with Kilimanjaro Safaris? Have you noticed a big difference visiting it early in the morning versus later in the day?

Tell me about your experience in the comments below!