Similar to last week’s round of RideMax Roulette at Disney’s Animal Kingdom, I’ve decided to celebrate tax day, which falls on Wednesday, April 15th, by doing another round of RideMax Roulette, this time at Walt Disney World’s Magic Kingdom. If anyone is in the park Wednesday and cares to join me, feel free to look for the really tall guy in the rope drop crowd holding a camera over his head and taking pictures of the crowds (hopefully) behind me. I’ll be making my way to Fantasyland on Wednesday as soon as the park opens.

I’ll be doing another half-day visit, and again, I ran my trusty random number generator to come up with a list of attractions to plug into RideMax. This time, the list doesn’t happen to include any of the big “mountain” rides, but the plan might be suitable for someone with young children who just wants to drop in for the morning.

Here is the randomly-generated attraction list, in alphabetical order:

As far as FP+ selections go, there’s nothing here that would absolutely call for FP+. I first tried using FP+ for Aladdin’s Magic Carpets, Enchanted Tales with Belle, and Winnie the Pooh, but this close to my visit date Disney’s system didn’t have my needed time selection for ETWB, so I swapped it out for the Teacups. FP+ there isn’t really needed, but the new plan RideMax came up with looks good, at least on paper. (And despite the lack of the more “thrilling” attractions, I know this exercise is good for helping me to “keep RideMax real” for customers. It’s been a long time since I’ve actually visited TSI, for example.)

Here’s a screenshot of the game plan RideMax came up with. Remember, RideMax’s goal is to minimize both waiting and walking time: 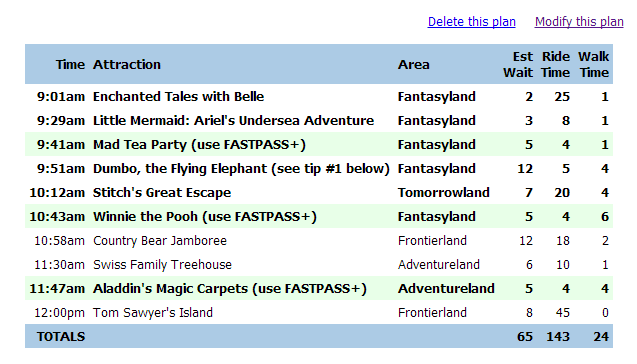 Follow along there, or if you want some exercise, join me at ETWB right after rope drop, and enjoy tax day in the park!