OK, so this is a little self-serving, but we received the following email from Jason, a RideMax customer from Texas, who had used RideMax to help navigate several days at Disneyland over the busy Thanksgiving break. It was their very first Disney trip as a family.

I’m sharing Jason’s email below in its entirety:

My family of five (Dad, Mom, 6-year-old girl, 3-year-old girl and 7-month-old boy) recently went to Disneyland and DCA during the busy Thanksgiving break. We also had another family of six with us that included two teenagers. We attended the parks on the Saturday, Monday and Tuesday before Thanksgiving. We expected huge crowds and long waits. While we did see huge crowds, we were so happy that the RideMax software virtually eliminated long waits. Your product is amazing and works as-advertised!

Leading up to our trip, I was somewhat dubious of how the software would perform during such a busy time, but our entire group was so thrilled with our experience! With one or two exceptions, we hardly even noticed the crowds around us. We had to do some juggling of rides due to our smaller children, but it all worked out much better than I expected. We rode every ride we wanted to, in many cases twice and a few rides three times. We also saw all the shows we wanted, met the characters we wanted and watched the parade.

This was our first Disney trip of any kind as a family. The trip far exceeded our expectations, and a huge part of that was due to your software. We will remember the trip for years as a memorable, joyous and positive experience. We will definitely use RideMax again when we go to Disney World for the first time in the coming years.

And thanks to YOU Jason for taking the time to report! I’m glad you had such a nice trip, and that RideMax could help!

Liesle and I visited Disney’s Animal Kingdom this past Friday, which marked the first night of the new extended hours, along with the new nighttime experiences taking place there now. Above is the scene on the river just across from Expedition Everest when we arrived in the early evening, complete with the floating stages used in the new show, titled Jungle Book: Alive with Magic.

The show is scheduled to run twice nightly, at 9:00pm and 10:30pm, and FastPass+ is available for the show.

Above is the scene on the pathway just in front of Expedition Everest, taken at around 7:30pm, or 90 minutes before the first show time. Note the rope running down the middle of the pathway, which is used to mark off the section of the pathway being used for the FastPass+ entrance.

END_OF_DOCUMENT_TOKEN_TO_BE_REPLACED

I’m writing this just after 6:00am on Tuesday, and just wanted to let our Disneyland customers know that we’ve increased our crowd level estimates for both Disneyland and DCA from today through Thursday. We *strongly* encourage you to create new plans if possible.

Note that we normally don’t like to adjust estimates so late in the game, but often our own sales are a good indicator of crowd levels, and the sales have been strong enough over the last couple of days that we think an increase in the estimates is warranted.

For those in the parks this week, have a great spring break! 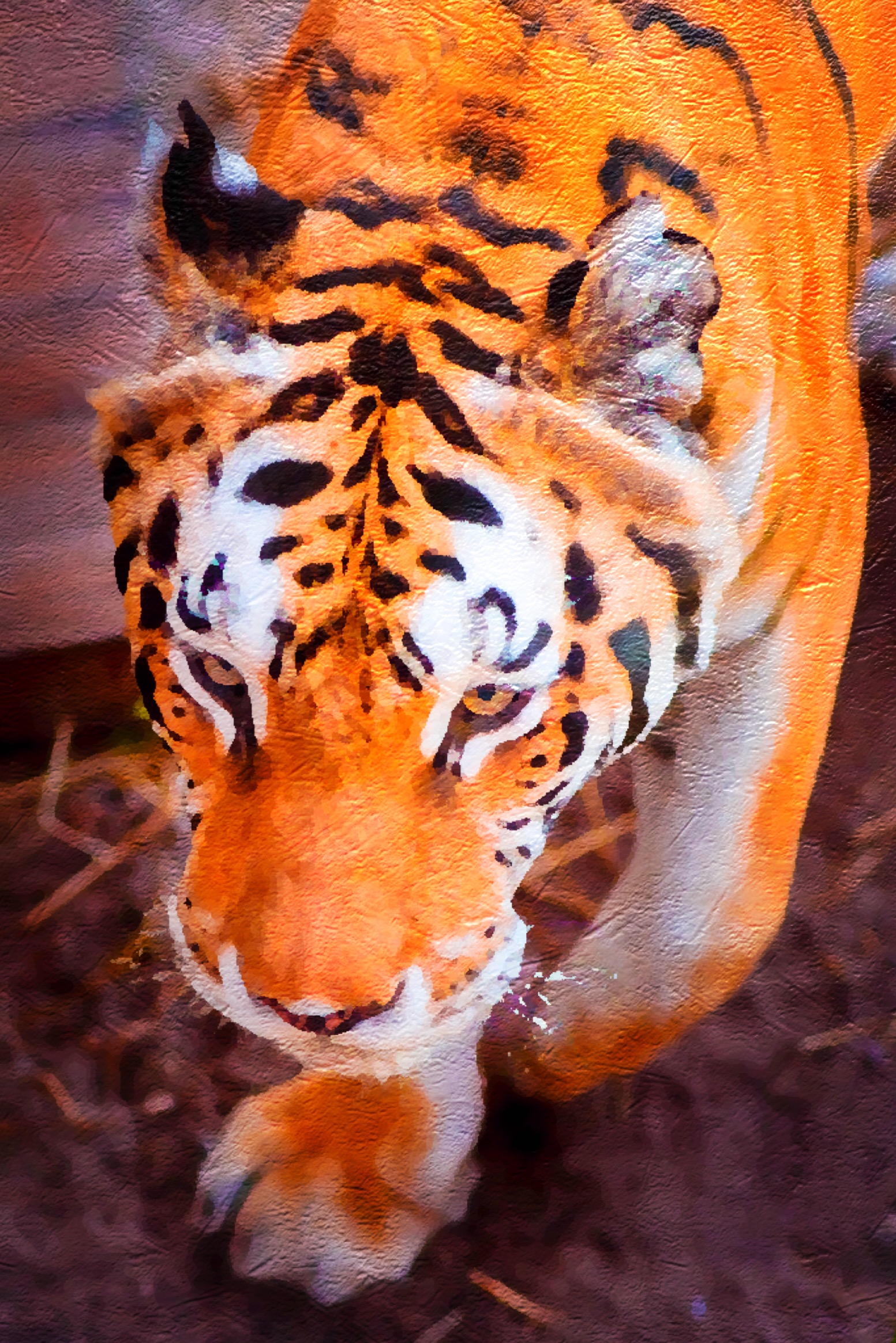 Liesle and I decided to stop into Disney’s Animal Kingdom this coming Friday for an afternoon visit, and as usual, we’ll be following a RideMax plan and doing some live tweets and Periscope broadcasts from the park. We love meeting RideMax customers in person, so if you have a free afternoon and are in the Orlando area, feel free to join us. Otherwise, you can follow along on the feeds I’ve linked above.

Our goal for Friday’s visit isn’t to do another round of RideMax Roulette, but to simply visit a few of our favorite attractions, as well as to check out the new Zootopia exhibit scheduled to open on Friday.

The attractions I plugged into RideMax are the following:

As you can see, a handful of attractions like this isn’t exactly a “stress test” of RideMax. But it does illustrate that the software is handy for mapping out a casual visit like this, just as it is for planning a much fuller day.

The activities that have “fixed” starting times in the plan are the lunch break and the Lion King show, and it’s nice having RideMax figure out how to visit these, mixed in with the other attractions, in such a way as to minimize walking and waiting, rather than having to map it all out ourselves. I’d also hate to risk missing out on Festival of the Lion King if the day got away from us and we happened to forget the show’s starting time.

Since this is an afternoon visit and we won’t be able to take advantage of low rope-drop crowds, it seemed pretty obvious that we’d want to use FastPass+ for Expedition Everest and for Kilimanjaro Safaris, so I also plugged those choices into RideMax.

At any rate, here is the plan RideMax came up with, and which we’ll be using Friday: 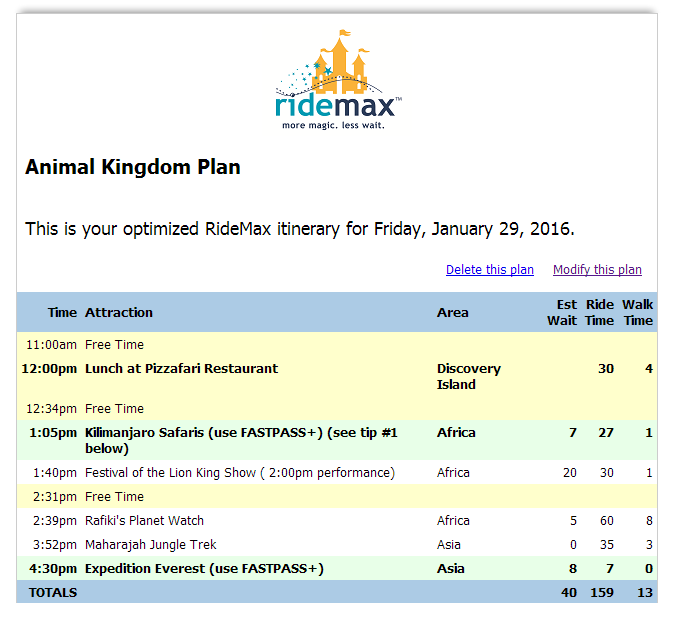 You might notice all the “free time” at the top of the plan and wonder what’s up with that? I originally told RideMax we’d be willing to start at 11:00am and go until 4:30pm, but the software was basically able to fit everything in after lunch, so it turns out we don’t need to arrive that early. I actually expect us to arrive for lunch at about 12:15 and go from there.

If you have some time Friday and want to join us in person, feel free to get those FastPass+ reservations lined up as outlined in the plan above. (We also secured FastPass+ reservations for the 2:00pm Lion King show, though I doubt we’ll really need them.) And of course, if you can’t come in person, feel free to follow along on Twitter and Periscope.

We hope to see you on Friday!

Word on the street has been that Disney World would offer FastPass for the new Enchanted Tales with Belle show in the Magic Kingdom, which is part of the new Fantasyland expansion project.

Disney held another soft-opening of the new area yesterday. While I was there I asked whether FastPass would be offered for this attraction, after noticing that what appeared to be the FastPass entrance didn’t have any signage indicating such.

The Cast Member staffing the entrance indicated that while FastPass would eventually be offered here, it could be quite a while before they do so. He seemed very sure that the attraction wouldn’t offer FastPass when the new area officially opens on December 6th.

I went ahead and removed FastPass support in for this attraction in RideMax, at least for the time being. If any of you have created December RideMax plans which have you using FastPass for Enchanted Tales with Belle, I recommend creating new plans instead.

Note also that it’s very possible we’ll continue to adjust estimates for the new attractions right up until the new area opens (and afterwards as well), so I really recommend creating your “final” plans as close to your actual visit date as possible!