It’s Thursday, September 18th, and even though Epcot’s Food and Wine Festival for 2014 doesn’t officially open until tomorrow, Disney has typically done a soft-open one day early, and today was no exception. I found a couple of new dishes that were also very delicious (see below), but I thought it would be fun to start with a timelapse video tour of the World Showcase, which I shot today as I made my way around the loop of countries. 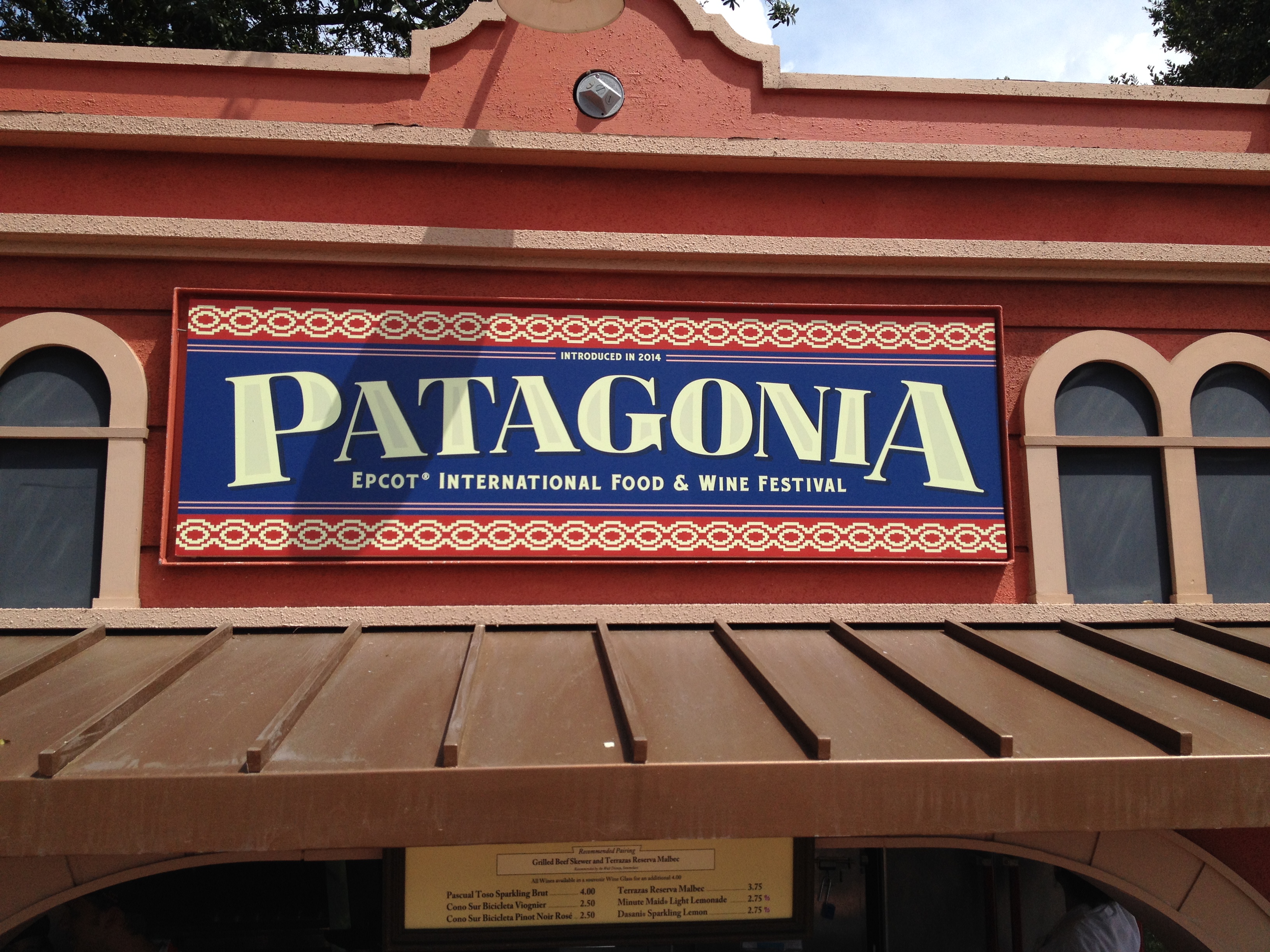 “Patagonia” is a new food kiosk at the festival this year, which takes the place of Argentina, and offers some of the same food. 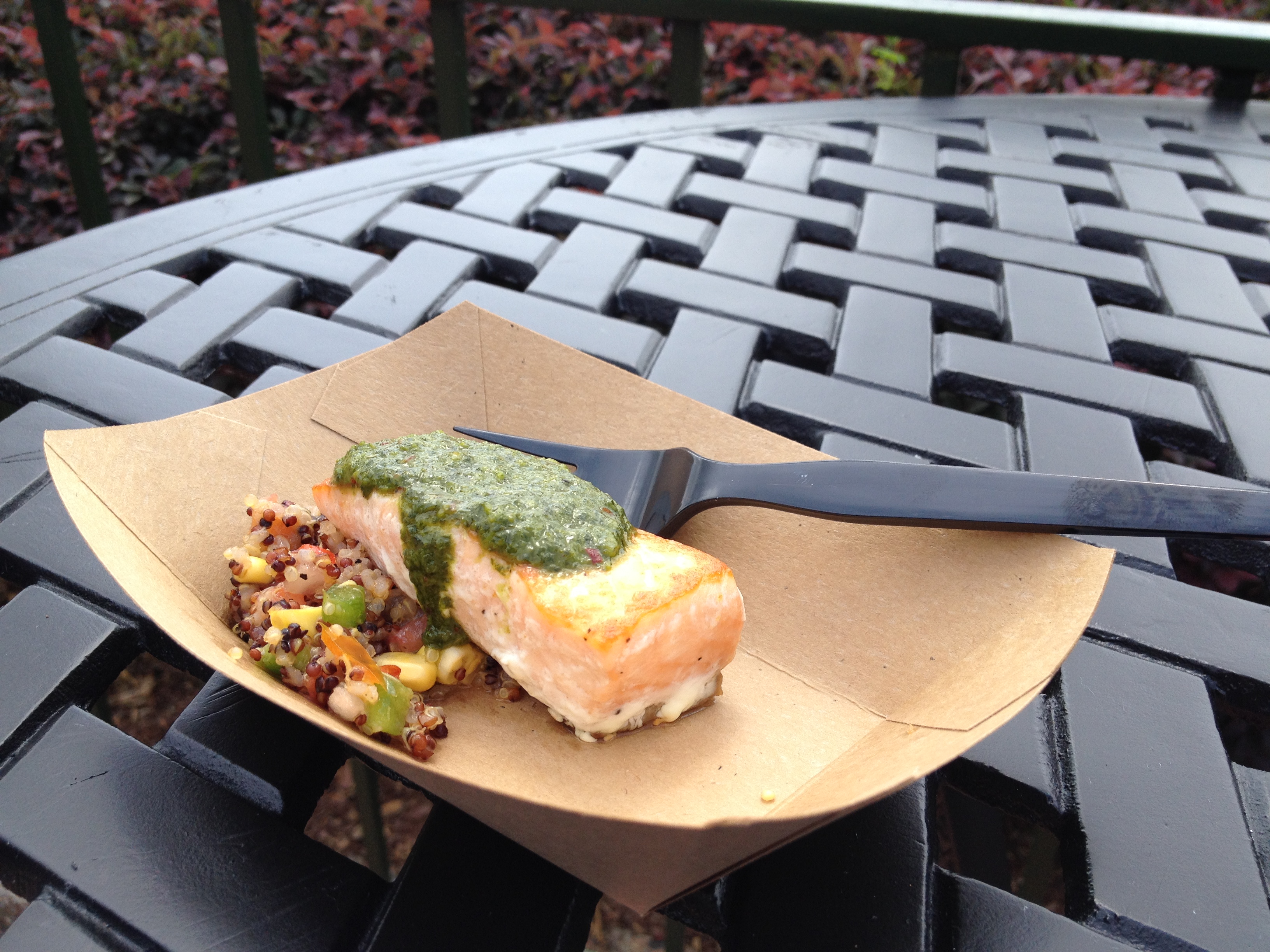 This is called Roasted Verlasso Salmon, and is a new dish being offered at the Patagonia kiosk this year. I thought this was quite good. The chimichurri sauce, as well as the accompanying quinoa salad, complemented the salmon well. 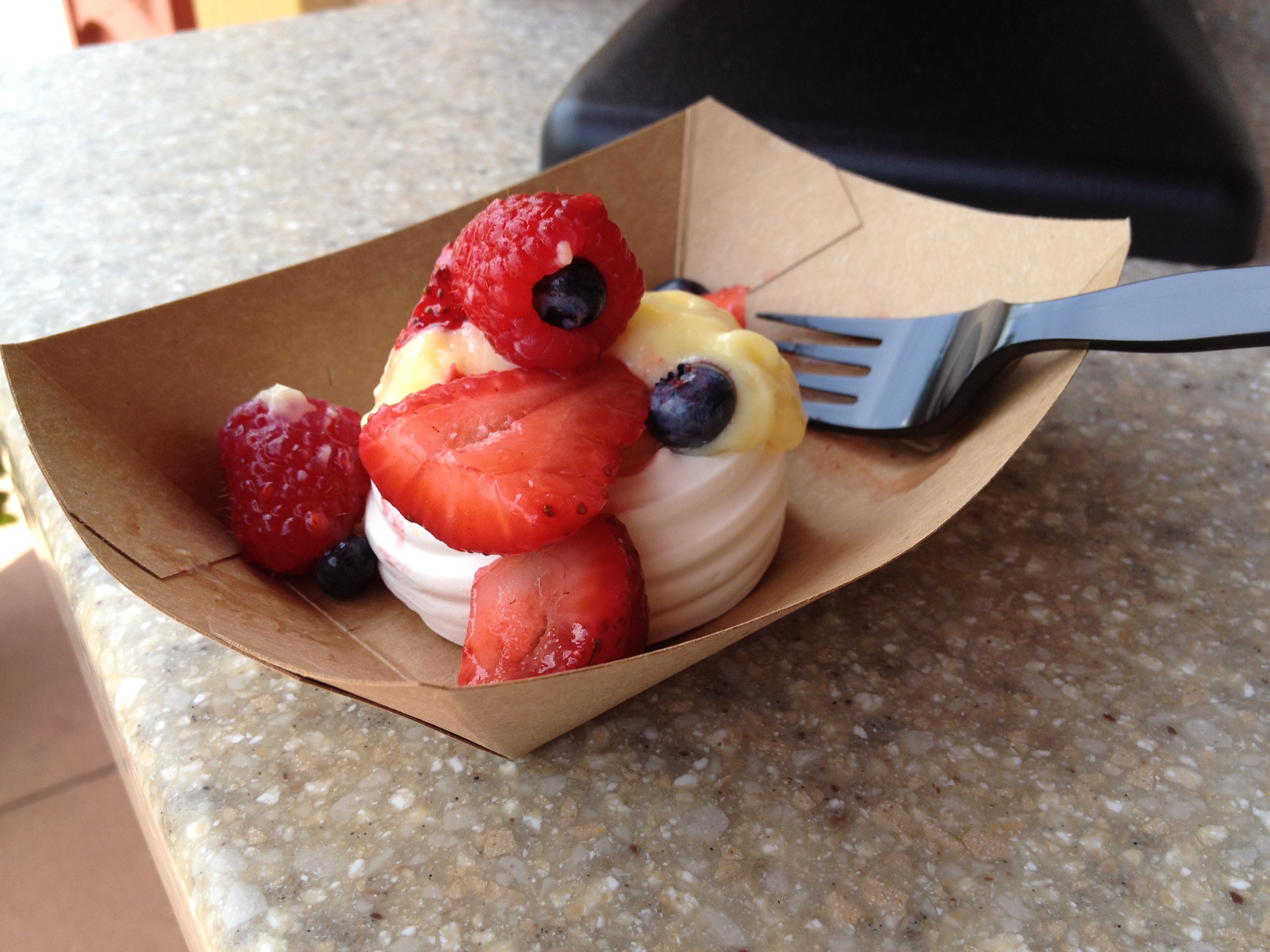 This dessert, called “Pavlova,” is also new. It’s available for $3.50 at the Australia kiosk. Disney describes it as a “crispy meringue shell with fresh berries and vanilla custard.” You’ll need a knife to cut through the meringue, but I thought this was delicious. I expect I’ll be eating this one many more times in the weeks ahead!

Do you have plans for visiting Epcot’s Food and Wine Festival? Share your favorite tips in the comments below!

The annual Epcot Flower and Garden Festival officially opened yesterday, but I went mostly for the food! Here’s a quick mini-tour of some of the flowers — and the food.

First up is the Snow White topiary (click on any of these images for a larger view). Is it just me, or is this the first year that Snow has actually had EYES painted onto her face? To me this looks way better than previous versions.

As a comparison, take a look at Belle in the image below, who is stationed in the gardens near France.

A bit creepy, no?

Like last year, Disney is offering FOOD for the Flower and Garden festival this year, and in my opinion, this really helps kick the whole experience up a notch. There aren’t as many food kiosks as you’ll see during the Food and Wine Festival, but the selection is still very good, and for the most part, Liesle and I both found the food delicious. We didn’t sample everything (all the more reason to go back!), but here’s a quick take on what we did try.

First up are the Fresh-baked Lemon Scones near the UK pavillion. This may have been Liesle’s favorite treat of the entire day. The dish could use a bit more of the raspberry and creme dipping sauces, but otherwise these were really, really good!

Look up and find Peter Pan watching over the festivities. #peterwantsafacetoo

Next up, in France, we tried the “Gnocchi Parisien à la Provençal” (or Parisian-style Dumplings with Vegetables and Mushrooms), shown above. This was also very good, sort of a rich pasta dish with enough vegetable “accents” to provide some variety in the flavor.

Also in France is the Orange Blossom Macaron with White Chocolate Ganache (or the “Macaron à la Fleur d’ Oranger” for those of you who prefer to eat in French). A very tasty dessert!

Along with Belle, the Lumiere Topiary is also nearby. I’m still not sure why Lumiere gets a face and Belle doesn’t. Maybe the candlestick union just had really good representation at the face-bargaining-table?

The Temaki hand roll in Japan was probably one of our least favorite dishes of the day, although it was still OK, I guess. I’ve lived in Japan for a couple of years, so I’m somewhat used to the nori seaweed flavor, but there was so much of it here in comparison to the rest of the dish that it sort of overwhelmed the other flavors. We ended up scooping out the “insides” and enjoyed the rest of the dish nori-less.

It looks like they’ve recently repainted the Torii Gate in Japan. It looks a lot more “orange” (less red) than before. I think these are supposed to be “Vermillion” in color. Maybe this is closer than the previous shade of red?

Next up is the “Pulled Pig Slider with Cole Slaw” near the America Pavillion. This was very good, and very filling. The cole slaw added just enough change in texture and flavor to the rest of the dish that it enhanced it quite a bit.

Also near America is the bacon cupcake with maple frosting and pretzel crunch. This was a very good, but also very dense, cupcake. It also contained a surprisingly generous supply of bacon. If you try this, make sure you have a beverage nearby to wash it down with. (I say this because I didn’t, and regretted it.)

From the Florida Fresh kiosk near Germany (why not?!!), this dish is “Shrimp and stone ground grits with andouille sausage, sweet corn, tomatoes and cilantro.” Be forewarned that it’s a bit spicy, but it was also really, really good! Our dish contained three large-ish shrimp, and was quite filling. I think I’ll be having this one again before the Festival is over.

This is the watermelon salad, also at Florida Fresh. The dressing was a balsamic reduction, and the combination of flavors, including the watermelon on the bottom of the salad, made this one of our favorite dishes of the day.

By this point in the day we were pretty full, but the Beijing-style candied strawberries are one of Liesle’s favorites, so we had to stop and get these. Delicious, as always!

We finished the day by washing everything down with the frozen desert violet lemonade, at the Pineapple Promenade.

Finally, here are a few more scenes from the park. Above is Bambi. Note the face. Not sure how Bambi qualifies for membership in the candlestick union though.

The picture above was taken inside the butterfly garden, as are the two below:

All in all, we really had a good time touring the Flower and Garden Festival, and I expect we’ll be back soon to try some of the dishes we missed this time!

What about you? Will you make it to the Flower and Garden Festival this year? Do you have a “must try” dish? Leave your thoughts in the comments below!

With the heaviest days of spring break just around the corner, Liesle and I had fun heading to Epcot today for the opening of the annual Flower & Garden Festival. Most of the topiaries we saw were recycled from previous years, but the big fun this year is that they’ve added food, and some of it is really, really good!

It’s sort of like the best of the Food & Wine Festival, but WITH FLOWERS!

This is the first year Disney has introduced food into the F&G Festival in this way, and I really like it personally. If you’re in the Orlando area from now until May 18th, be sure to check it out!

Above are the three dishes available at the “Florida Fresh” kiosk. Liesle and I really liked all three of them. It may not be obvious from the picture, but the dish on the right is a watermelon salad. Mmmmm!

The menu for the kiosk in the America Pavillion. By the time we reached this part of the park we were pretty full, so we’re saving these until next time.

Did I mention there are flowers?!!

There is a children’s play area back here with thematic elements from the new movie.

The “Frushi” in Japan was excellent!

It looks like I’m not the only blogger here today. Sorry for not stopping to say hello, guys. I’ll have to introduce myself next time! 😉

These desserts at the UK kiosk were great!

I’m going to have to get one of these guys some day!

I snapped this as we were leaving the park. I’m sure we’ll be back again soon!

And by the way, if you’re planning to visit the festival during the busy spring break season, my advice is to enter the World Showcase as soon as it opens at 11:00am — or even sooner if Disney opens it early. The food kiosks only get busier as the day goes on!

So, what do YOU think about this year’s addition of food to the Epcot Flower & Garden Festival? Let me know in the comments below!